“The Creation of Barter 6”

But today, Tiffany (known as “Bunnie” to her following – and shortly as “Tiff” to me!), can be seen from the heat of the Sonoran Desert carefully manipulating oil onto a canvas to recreate and, dare I say – REMIX – familiar classic portraits. Her last piece went viral, an ode to the late Mac Miller, and we were more than happy to expose her art to you.

Her latest piece is….well, I’ll let Tiff tell you about it. She calls it “The Creation of Barter 6“, inspired by ATL’s flamboyant superstar, Young Thug. and the gender-progressive Sofonisba Anguissola. Tiffany – the floor is yours!

“Hey guys! My latest work of art titled “The Creation of Barter 6”. It draws inspiration from elements rooted in Art History and Hip-Hop culture.

This painting tells the story of both Sofonisba Anguissola, a 16th Century renaissance artist, and Young Thug, a 21st Century musical artist, through the use of symbolic imagery and eye-catching detail.

Sofonisba Anguissola is recognized as one of the first female painters who sought out artistic knowledge during a time-period in which female creatives’ talents were not welcomed by master artists. Anguissola transcended artistic boundaries by focusing heavily on self-portraiture, a subject matter which was wildly uncommon before the emergence of Rembrandt in the 17th century. Anguissola is remembered as an artist who pursued her passions regardless of the criticism she faced.

Similarly, when Young Thug was initially introduced into the media, he faced backlash for his use of vocal instrumentation and his lack of formal wordplay. Ironically, the same techniques he was chastised for later became commonplace in the Hip-Hop community, influencing renowned artists such as Lil Keed, Gunna, and Lil Uzi. Young Thug also challenges hegemonic masculinity in the entertainment industry by showcasing his versatile wardrobe, which commonly features Women’s clothing.

The likeness between Anguissola and Young Thug is exemplified by both artists’ unapologetic attitudes when showcasing their personal artistic visions. “The Creation of Barter 6” incorporates components of Anguissola’s “Self-portrait” (1556) and her personal story as a foundation for the reference imagery.

The likeness between Anguissola and Young Thug is exemplified by both artists’ unapologetic attitudes when showcasing their personal artistic visions. 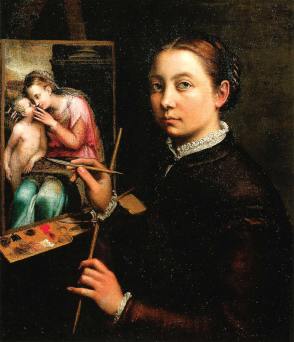 Using “Self-portrait,” I transformed the original figure displayed in her painting into Young Thug. In my artwork, Young Thug is now depicted as a 16th Century renaissance painter creating the cover art for, what I personally consider a musical masterpiece, Barter 6. Illustrating Young Thug in a subtle blue dress pays homage to his cover art for the 2016 LP “Jeffery” where Thug is pictured shamelessly wearing a dress.

Anguissola and Thug both have continuously demonstrated their ability to pursue radical aesthetics, despite any previously defined social norms/dogma intended to hinder their individuality. “The Creation of Barter 6” is a celebration of two artists who embody unique experiences and mindsets that ultimately became highly influential in their respective artistries!”

Editor’s Note: My door is always open to you my love. Peace!

Vinyl of the Week💿